Shiny thing make it all better.....

Been thinking and having mild chest pains lately regarding

Thinking of shiny objects i was resigned.........well not resigned but thought it was a foregone conclusion I'd be buying Nasa instruments - nothing wrong with that, they're perfectly good and exceedingly well priced.
It was while researching marine instruments on the internet i came across a company called Echopilot so immediately trawled fora and found very positive reviews as i genuinely had never heard of them. 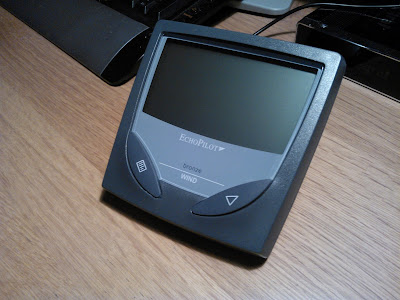 Even more curiously it turned out they were based about a mile from my front door, eventually curiosity got the better of me so decided to investigate what they had to offer.

Disliking 'tyre kickers' in my own profession i didn't want to appear a time waster and pointed out to the very knowledgeable bloke (who talked me through what they could do)  i was only looking to get an idea of cost and capabilities. However the more i was shown what they could do the more i realised these instruments are fantastic, not only the plethora of data each one outputs but the fact you can use other manufacturers transducers and sensors, they really are the swiss army knife of the marine instruments world.

There was even an opportunity for 2d sonar but for the fact the transducer couldn't be mounted internally i'd of had one, however one thought sprang to mind - cost. I wanted these but was dreading the cost based on their technical capabilities however much to my surprise they were no dearer than Nasa's stuff.

Still brimming with excitement i couldn't help but ask the incredibly knowledgeable woman Sue who dealt with my order (Speed, Wind & Depth) why i hadn't heard of them - she said, "simple - we don't have a marketing budget anywhere like our competitors".

It got me wondering; how many other great little companies like Echopilot exist that you don't really know about?

Been fascinated by your posts over the years - sounds like things might be kicking off again. As someone who grew up sailing on a Centaur with my parents, it is exciting to see what you have been doing.

I've actually stumbled back across your blog because of the old post I'm replying to - about the Echopilot. My current boat has a set of very very old Stowe instruments, the tranducers work fine but the displays are struggling. This EchoPilot is the only way I can find to make use of my existing transducers but update the displays. Unfortunately it is out of production and seemingly impossible to find - meaning that I need to replace my through-hulls to update the devices, and they aren't standard sizes!

I'm contacting you on the off chance that you might have reconsidered your use of the Echopilot and that it might have become superfluous to your requirements? If this did happen to be the case, I'd be very interested in buying it from you and most likely at a price that fully recovers you original expenditure.

Failing that - if you happen to know anyone who might have one that I could purchase, I'd be really interested to hear!

Looking forward to further updates on the build!

Hi John thanks for looking in, at the moment i plan on fitting them when the time comes, sorry, if anything changes i'll let you know. Yep just need to finish getting my van back together and then it'll be time to start back on the boat.

Cheers for getting back to me and obviously understand completely. Seems like a great bit of kit! Just frustrated that they dropped out of production when Echopilot were taken over. I suspect that there are a good few floating around the place - just need to track one down!

In part your blog inspired me to be a little more creative and adventurous with my current boat. I've (mostly) finished my winter project of hacking out most of the original fittings of the aft cabin to convert from a double, with little sofa and wardrobe - to three births for my kids. Nothing like the quality of your work - but functional. First outing this weekend since the changes. Fingers crossed they like it. Just don't let the Moody owner's club know, they will probably linch me for going against Bill Dixon's designs......

Good luck with your van!

Just checked Echopilot's website and they're no longer in my town, they're headquartered in Denmark?! Great shame, seeing as when i went to see them to buy the instruments for my Centaur their facility was an electronics-nerds paradise.

They were real enthusiasts of what they did with test rigs and show displays to demonstrate their products. Really gutted to see these type of small innovative firms going to the wall another being Reactive Resins, that one still hurts two years on - i can't begin to tell you how much better their epoxy was compared to Wests, just crazy how they weren't more successful.

Still glad to be of some help even if its just a bit of inspiration, all helps me to get motivated for the final push. Send some pics of your work when you get the chance.