I can almost smell the paint 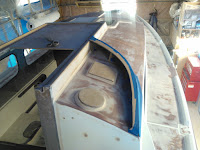 Yes i'm almost there with the deck, i have a few more bits in the cockpit to fill and fair namely all then and we'll be ready to prime. I've also been busy prototyping the coamings with an eye to getting them made this coming week. That said i have a set of wardrobes to make and fit this week too but i seem to have found my mojo or a bit of it despite the heat wave.

It is because of the weather i've been keeping odd hours on the boat - either starting early or working on into the night as this is when the temperatures are at their lowest. I'm hoping over a few evenings next week i'll have the cockpit ready for barrier coating and then i can mask up and get priming.

I'd like to say that the filling and fairing on this project has been fun but that would be one bloody great lie for it is a truly arduous task that i will never repeat; i promise you that. If i ever buy another boat (which i don't think is likely) and it has osmosis - tough shit, its not getting a peel knowing what it takes to remediate 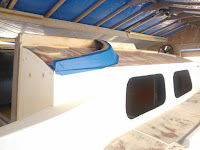 I still feel a little anxious as we move into the latter half of the year with no topcoat on the hull but judging how inconsistent the UK weather is its got to be done in the next couple of months as i can't face the hassle i had at the beginning of the year with all the delays the weather bought.

One thing i have never quite reconciled is how long everything takes when you work alone, it drives me to despair at times, going about my tasks ticking them off one by one and you stand back and see what its contributed to the overall project and i think is it ever going to get finished? It will of course, but i would happily sit down with anyone contemplating what i am doing and try to talk you out of it. 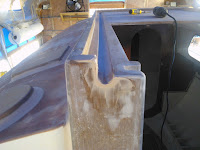 I thought the other day how it would of been easier to have started with a brand new hull & deck (if such a thing existed) but then i thought no it wouldn't as i have structurally modified so much it would of been easier to have built a new boat from plans. I'm being slightly gloomy and i have no one to blame for where i'm at but myself but i just can't reconcile the sheer amount of effort required on a constant basis to make the smallest of steps.

So i look to August as a pivotal point in this project as when the boat's primed and the engine on its bearers it should will be downhill all the way.
Posted by roger ball at 22:47