Right, where was i? 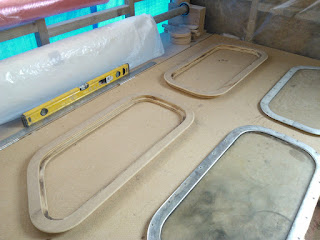 Spending all of June and the first week of July working on the bungalow wasn't really what I envisaged. I only intended to shoot-in new internal doors and give them a lick of paint. However when looking at brand new painted doors against cracked walls as well as discoloured gloss and the now shitty looking original joinery I inadvertently set about tidying the place up unintentionally re-decorating, re-plastering and re-making all the joinery in the process.

Now some six weeks later I can get on with the business of boat(re)building. Right: now where did we get to last time? I'd just finished the cockpit speakers and that weekend I started cutting bales of cloth for the windows.

Thats right I'd just started work for the second time on making the windows having not been particularly excited about the wooden frames I'd made some two years previous. Still the idea was sound just the execution poor so decided to copy the frame i'd made in marine ply using epoxy and cloth so no chance of rot.

I would make each frame as a three part affair; outer frame (the bit you see externally) then the mid section and then a trim piece to sit over everything inside. Now to speed this up I would batch each lot of frames so i would make four outers then four middles and four inners, sounds good no?

Infact I'm still abit pissed off with the amount of time and money i wasted (2 days and £100). I thought it'd be a great idea to laminate all four panels up in one hit separated by peel ply. Long story short i ended up with a panel of solid bi-ax 1000mm x 600mm and about 20mm thick that I only managed to separate with wedges and a large mallet and not without alot of damage to the panels but as with everything on this project another lesson hard learned.

If i'm being honest the work on the bungalow was a convenient distraction, as by the beginning of June I had worked some four months straight give or take the odd day for paid work and was finding it hard to keep the pace. 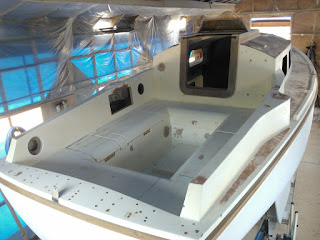 It hasn't helped though going straight back into fine filling & detailing the deck and companionway, tedious at best but with extra-ordinarily high temperatures it makes the day a little more tetchy when epoxy kicks super fast. Still; taking a positive the stanchion bases that were all previously knackered look brand new and should look great once painted.

To help ease myself back into it some more I tackled a job this weekend to make a few more roller bearing bars to hang the various rolls of cloth and peel ply on as the rope was slowly cutting through the cardboard rolls the cloth's mounted on making it impossible to un-roll. At the time of writing this i'm still optimstic about getting the deck primed in the next couple of weeks but i have moments still of feeling totally overwhelmed by the sheer volume of work thats left not to mention money to find.