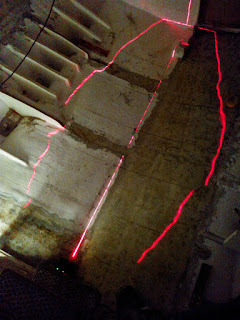 Its one of those ideas i've harboured from the start, to make the boats cabin a better place to be and seeing the wasted space as i removed the moulding - no doubt one of the many sacrifices to mass production - made me think i really need to plan this before fitting anything back in. Its safe to say not much got done this last week other than borrowing a mate's laser level and putting the floor bearers down seeing as regardless of what i do above, the boat will need a floor.

I was amazed that after sweeping the laser around the bilge i could drop the floor some 50mm and still have a similar shaped floor to what went before.

Having got everything bedded on sikaflex and levelled to the laser i'm now to remove the port side of the main bulkhead. Waving a laser as well as a conventional bubble about the place i'm more than a little sure that nothing is on the money, this is a little concerning as i levelled the boat after the keels were fitted to both the main bulkhead and three datum points externally. My thoughts now are that all the bits i've fitted to the bubble may sit at an odd angle once on the water - how do i know this?

Well after surveying the main bulkhead it leans out at the top on the port side towards the sidedecks some 10mm over 2ft so that translates to 30mm from bilge to mast step whilst vertically level on both sides of the door opening at either ends by respective side decks its a total car crash.

I think this has contributed to a recent dip in motivation as trying to put right other peoples work and then execute mine precisely has always irked me - why can't people do the job right the first time? - i know i'm committing something approaching heresy when i say this but my Westerly wasn't very well built at all.

Seeing as the press refer to them as the byword for quality; of late i've referred to them as something altogether different and not entirely broadcastable, still in their defence the numbers they were producing them in, the standards were going to slip - Lloyds cert or not. Which reminds me, i've never ground so many air bubbles out of a bilge than on mine, more so than the outside after it was stripped so how the hell my boat passed muster is anyones guess?

Still this coming week i'll don the red tunic and brown trousers one more time and remove most of the main bulkhead with one a little more straighter and also to provide a little more leg room in the heads at the same time. I should say at this point that the plywood is now coming from Bamptons in Southampton, these guys (Bamptons) are top notch with decent grade Far Eastern as well as Gaboon based ply and at prices that don't make your arse droop either. 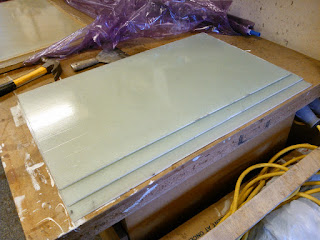 I've also sorted out the mess i made earlier in the year trying to make structural panels out of bi-ax cloth and epoxy, instead of trying to do it in one go i decided to laminate a panel a day and its been a total success and will have enough left over to make the backing plates for the chainplates and a few other things besides.

One of the chaps on the PBO forum spotted this - any use to you??

Hi Steve, thanks for looking in. I've made a new rudder for the boat using the old stock. Theres another one on ebay too, problem is having looked at one before i made a new one a few years back the foams usually saturated so need to split the blade and dry then re-bond. I found it quicker to cut two pieces of marine ply and bond them over the old stock, cheers though mate.