Boats are funny things, apart from anthropomorphising them, they tend to reflect their owners character quite accurately. I've come to this conclusion having followed many a blog similar to my own recording the up's and down's of ownership and restoration and realise we humans love a challenge,............ or are just plain barmy - one of the two.

I freely admit my project makes no sense whichever way you look at it but my excuse (and where i still get excited from time to time) is solving a problem with increasingly limited resources and still creating something ace.

The companionway hatch being one such example; it leaked like a sieve, didn't look great and was slowly becoming a maintenance item. It took a long time; a couple of years on and off - sketching and mocking-up designs in between other jobs until i reached the desired solution that was both practical and good looking.

The windows too; i could've given Houdini my hard earned and had a spanking new set of frames made, only for them to start leaking again in ten years time or i could sit down and design a composite frame that has no physical fastenings, are simple to make, way more durable than the originals plus learn new skills along the way.

Its all too easy to stand on the sidelines and tell someone they're stupid - especially with the rise of social media - for thinking a little different. I got stared at like i'd grown a second head when i showed this picture to my elder brother some four years ago of what i was going to do to Dad's pride and joy. 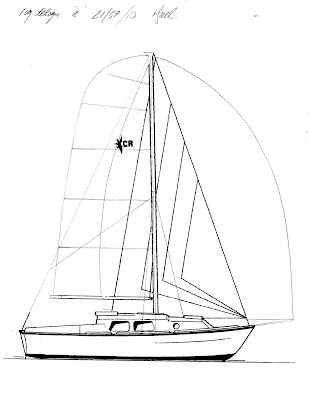 Admittedly his first question was why? to which i replied well why not? And if it gets the boat moving quicker than 3 knots in a force 2 its worked, although there's absolutely no logic to it other than a curiosity to see if it works.

Sure I could save my pennies and buy something newer and faster and there's nothing wrong with that but for me its the willingness to think a little differently whatever the reason may be. Although in my case its normally penury so its become something of a necessity to learn these skills rather than pay for them.

Which brings me to the curious case of Mr Winter and the Centaur well. Having first read his proposal on ybw.com i thought it a little strange but then remembered the Centaur 'Lookfar' that circumnavigated the globe not once but twice and that's powered by an 8hp Honda.

So it was with a growing sense of bewilderment when the knives came out for suggesting such 'heresy', sure there will be many constraints to overcome like working in a confined space as well as the engineering to give the idea legs. But whats wrong with a little creative thinking to overcome a problem that keeps many boats rotting in yards ?

You only have to look at my previous post below to see there's yards up and down the country slowly filling up with dead and dying boats and if Ebay is any kind of yardstick there's an almost inexhaustible supply at present.

So i say good luck to Dylan for approaching this problem from a different angle and one i'd certainly never would've thought of.

As Edward de Bono said, "No way of looking at things is too sacred to be reconsidered".

Too bloody right... far too many precious people on the PBO forum.. it's not their boat he's proposing to cut up so why not see if it works before endlessly repeating it's a bad idea????

so, if anyone knows of a suitable Centaur moldering away, unloved and accumulating yard bills and one that deserves at least one more adventure before meeting up with a JCB and a skip.... contact me dylan.winter@virgin.net

Greg Vanderboom ~ Something Else said...

Roger,
I found your blog from the Sponberg Design site. I understand first hand the mentality you’ve experienced. My Westerly GK29 is on the receiving end of negative comments all the time. The sailboat racers say “Why are you wasting your time, money and effort on that 4kt Shit Box (4ktSB), I’ve seen better boats cut up and thrown in the dumpster.” I looked at a lot of boat and this one spoke to me. I say live and let live; and enjoy the ride.
Greg
Something Else

Greg thanks for taking the time.
Eric Sponberg's THE man, can't wait to put his drawings into practice, i'm just a little bit skint at the moment but no matter. Yes....derision; its a character-building experience isn't it? The GK's are a pretty boat, i don't know why anyone would dissuade you from buying one. I understand they give a good account of themselves in a blow. From your blog i can see you've put the hours in, the windows must be a massive improvement on what went before as well the engine. Its funny watching the heat Dylan's created on a few fora, i never realised sailors were so staid in their ways. I mean look at the car restoration scene, worldwide - you see all manner of mods both aesthetic and mechanical; i don't see why more people don't get involved doing like-wise with boats. I know one bloke who is, Rob Hoffman in the US with the psychedelic Pageant and it looks great.
You're bang on about your boat, if it stirs something in you, go for it, why not? I believe no person buys a boat with their head its always their heart. Its all too easy to commoditize decisions we make and lose sight of why we choose the sea as our pastime in the first place.

(couldn't edit so deleted and corrected the spelling mistakes)