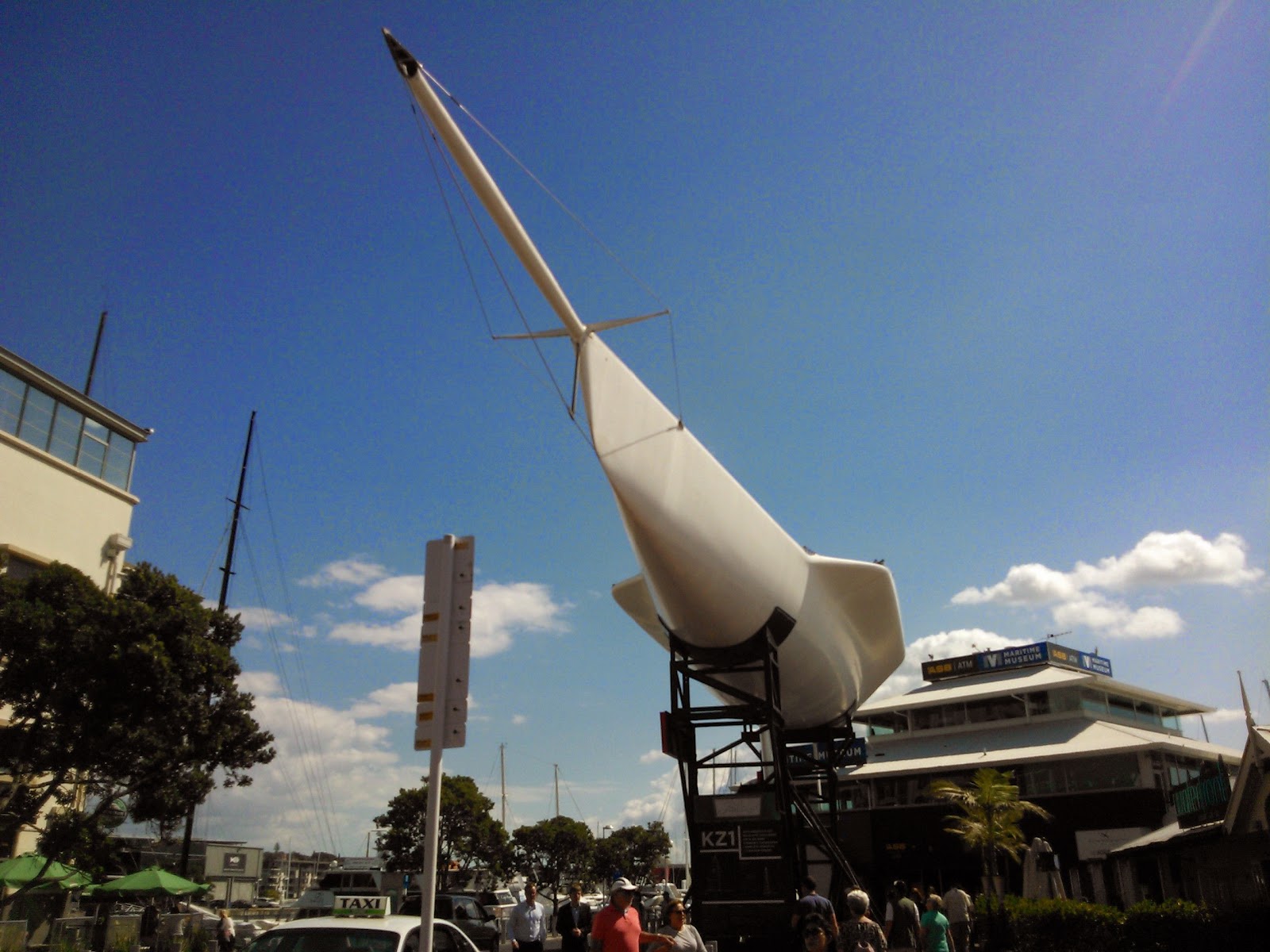 Currently visiting my elder brother Rik and his family down in New Zealand well Hamilton to be more precise, they say travel broadens the mind, the jury's out based on Hamilton however yesterday was the stand out of the holiday so far as we spent the day in Auckland. 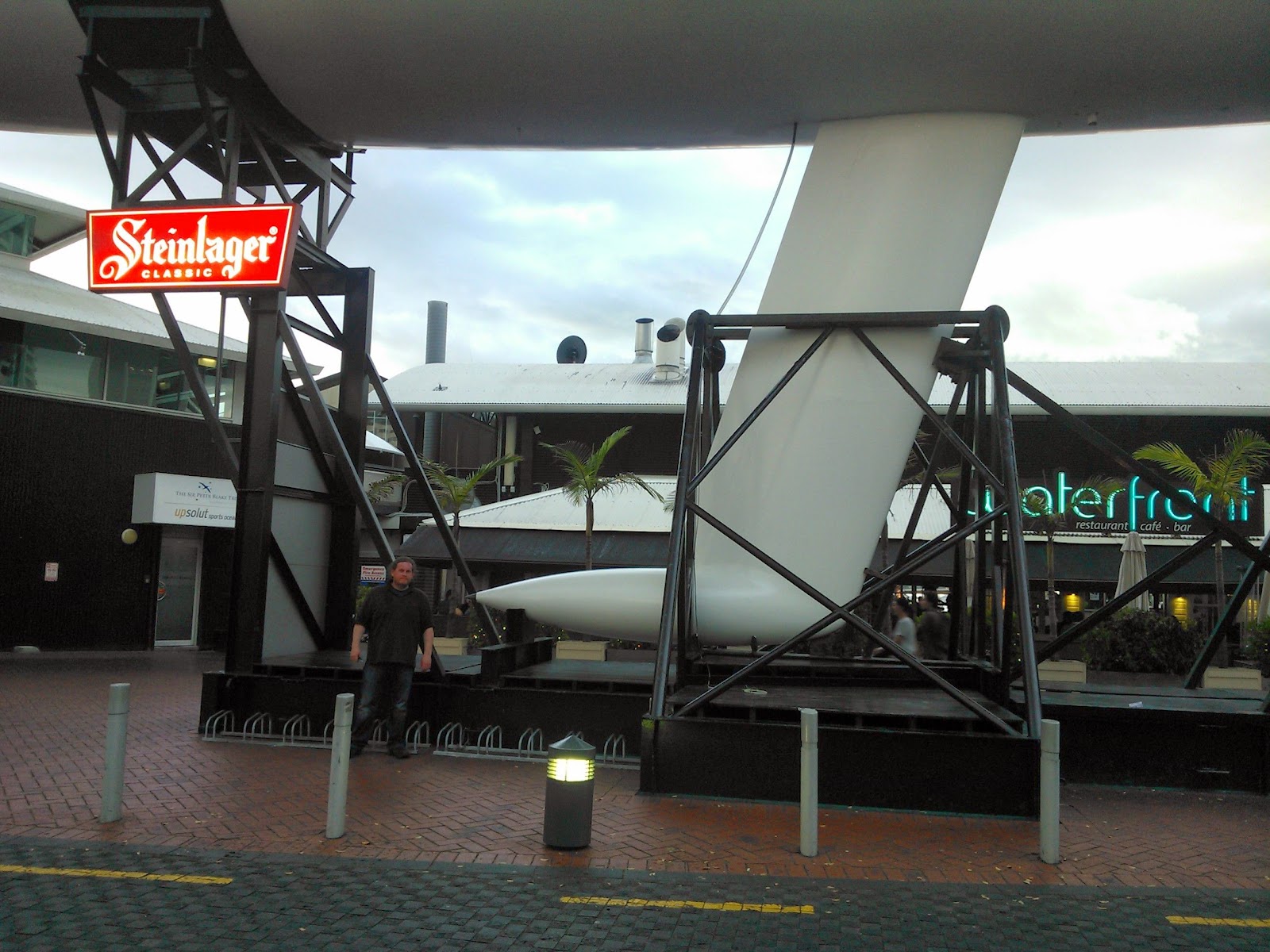 Getting down to the viaduct i was greeted by what first appeared to be a Nimitz class aircraft carrier but later turned out to be KZ1, Michael Fay' attempt at wrestling the cup back from the Yanks in 1988.

This boat is huge! To give that context we parked on the sixth storey of the multi storey car park opposite and you could just see above the decks. It was only when standing next to keel and looking up some fifteen to twenty feet at the boats hull you realised what a beast this thing is, I could only imagine how it looks with the mast up as that was missing but impressive all the same. 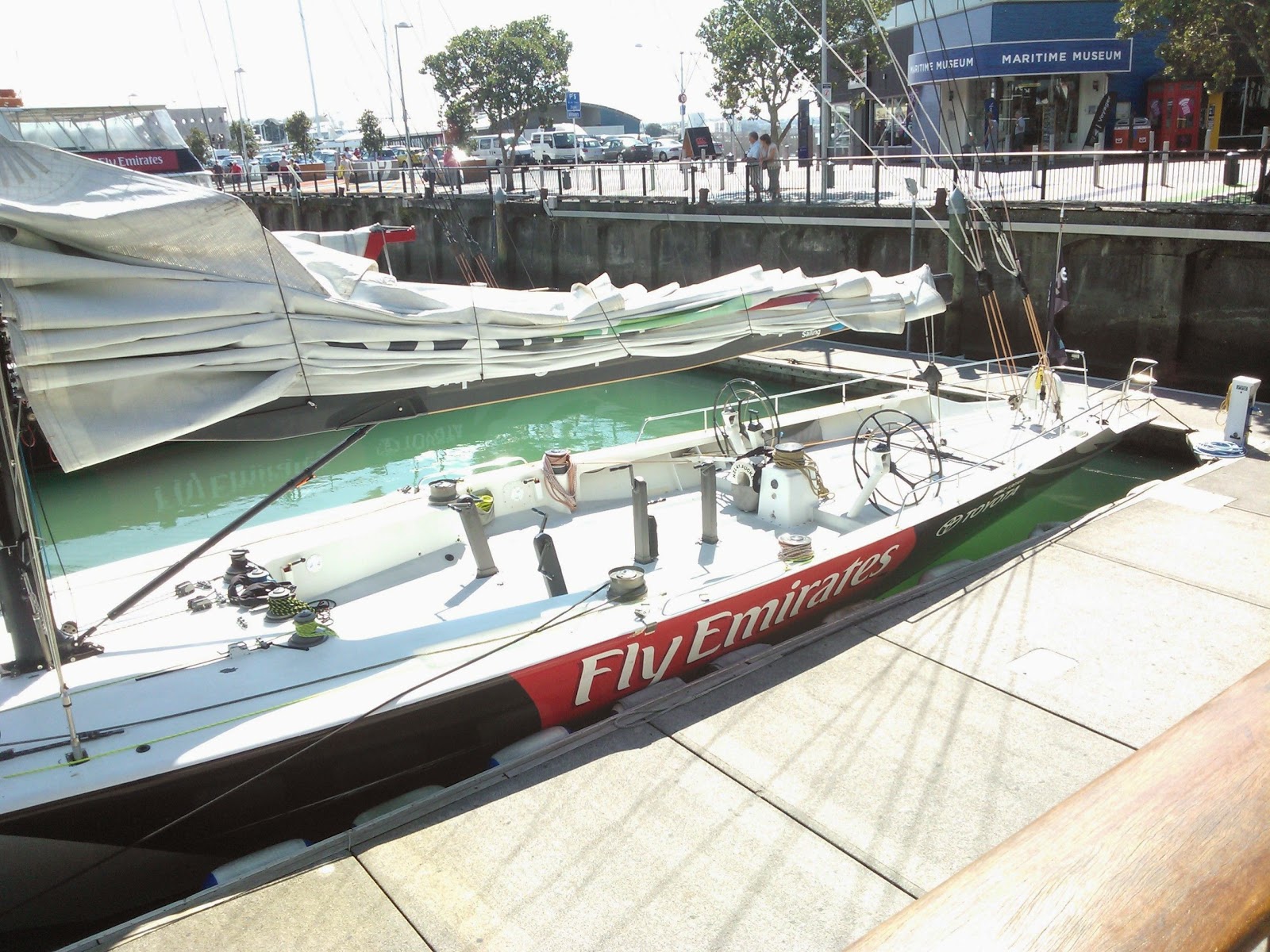 After a wonder around the Team NZ headquarters and the rest of the viaduct we had a three o'clock appointment with an America's Cup boat well a match race all courtesy of brother Rik. All i can say is if you get the opportunity to do this, do it as these particular boats maybe years old but the experience was priceless. 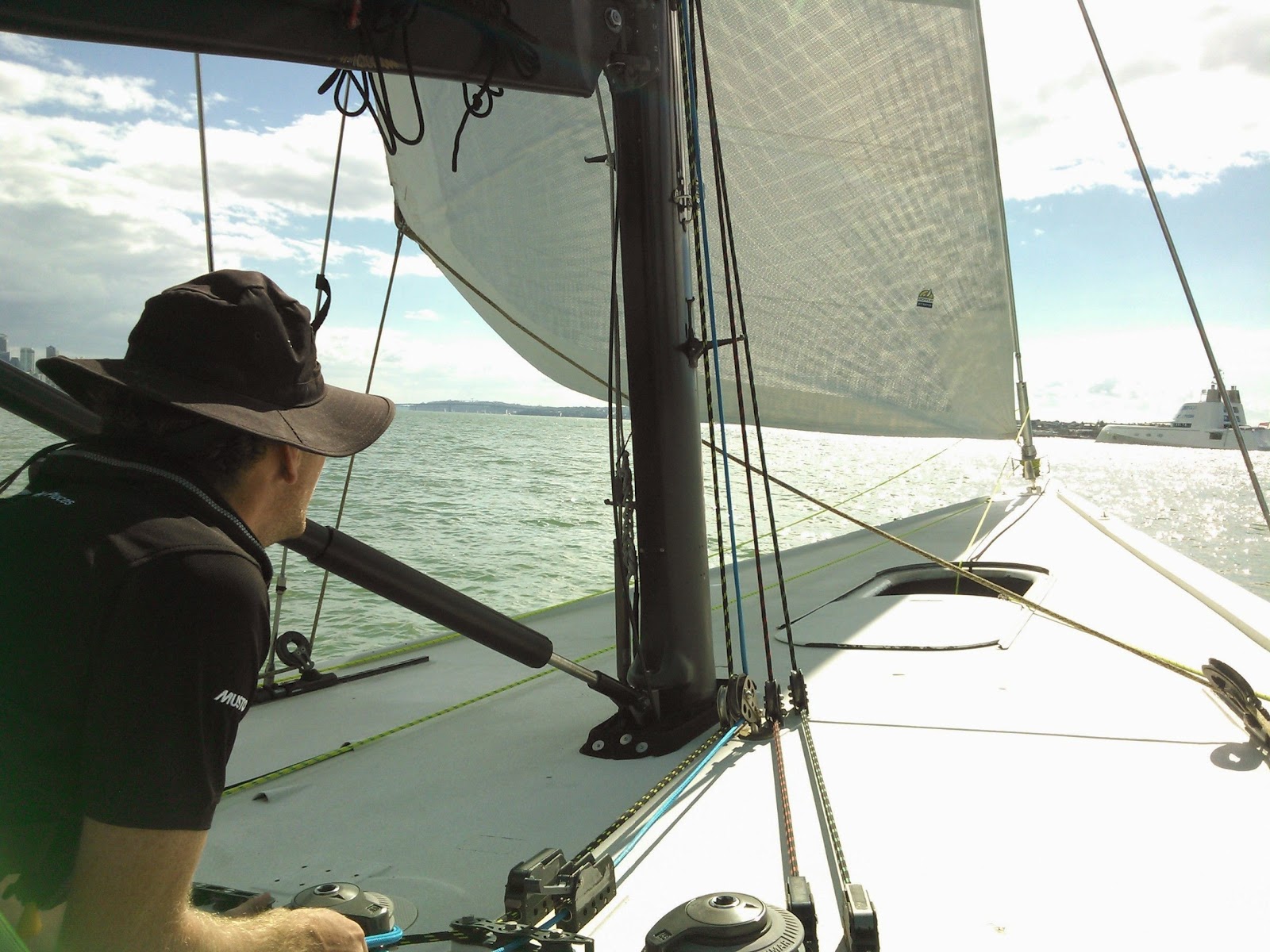 Once out of the viaduct and with the sails up a race course was set up and so the pre-start manoeuvres began. We did everything you see on the real race including being in touching distance of the other boat a handful of times, myself and bro volunteered for the front starboard grinder which incidentally was the most intense workout i've ever had.

The skipper told an interesting story regarding the last British entry  in 2007 where the boat was actually slower than the boat we sailed which was built for the Japanese to contest the 1995 America's Cup, bit embarrassing as one of the crew - an English lad - Hugo explained it now resides in a hangar somewhere in Cowes. 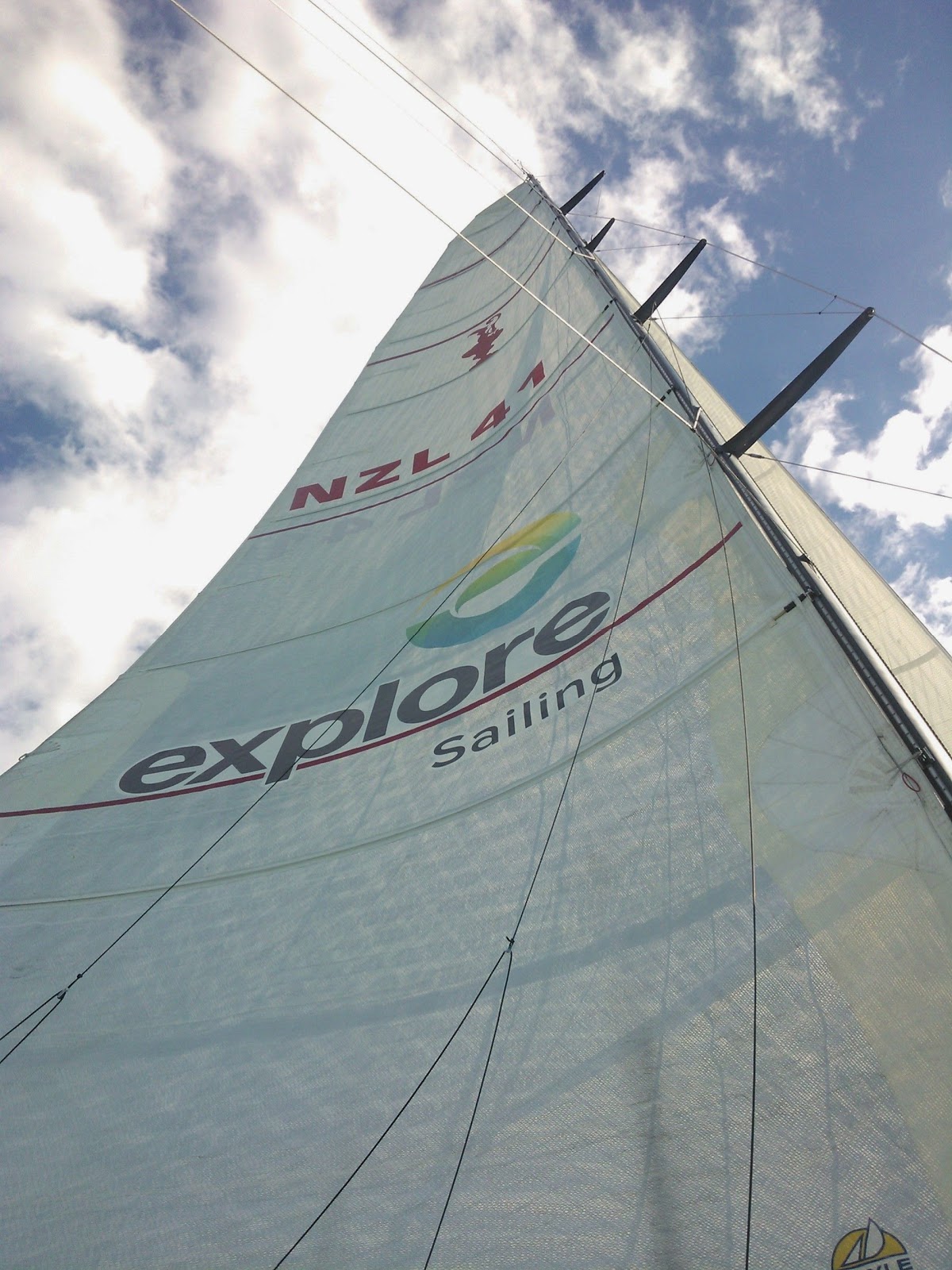 After what seemed like no time at all our time was up, i should point out we won 2-0 even with a dodgy hoist and set of the kite but our boat excels downwind which helped coming up to the line from behind on both occasions. Of note was that whilst we (the tourists) were utilized to haul halyards and sheets via the grinders it only took a crew of four (the pro's) to sail it. I didn't get many pictures of the action as i had my head down in the pit - i couldn't do it for a living but for an afternoons fun i heartily recommend it.

Greg Vanderboom ~ Something Else said...

Roger,
That would be an epic adventure sailing an America’s Cup boat! In San Diego one can sail on Stars & Stripes 87. I’ve seen it but never done it. My favorite sailing tee shirt is a Team New Zealand from the 2000 America’s Cup. I purchased it while in Christchurch supporting the NSF Antarctic Program. My Air Force Reserve unit flew Operation Deep Freeze missions from Christchurch to the Ross Ice Shelf transporting scientific equipment and personnel to McMurdo Station. Good times in New Zealand!
Enjoy!

Cheers Greg, i've another week left then home, boo! This week we're fishing and of course drinking although my back is hurting i'd like to think its from yesterday's sailing and not the booze but who knows.