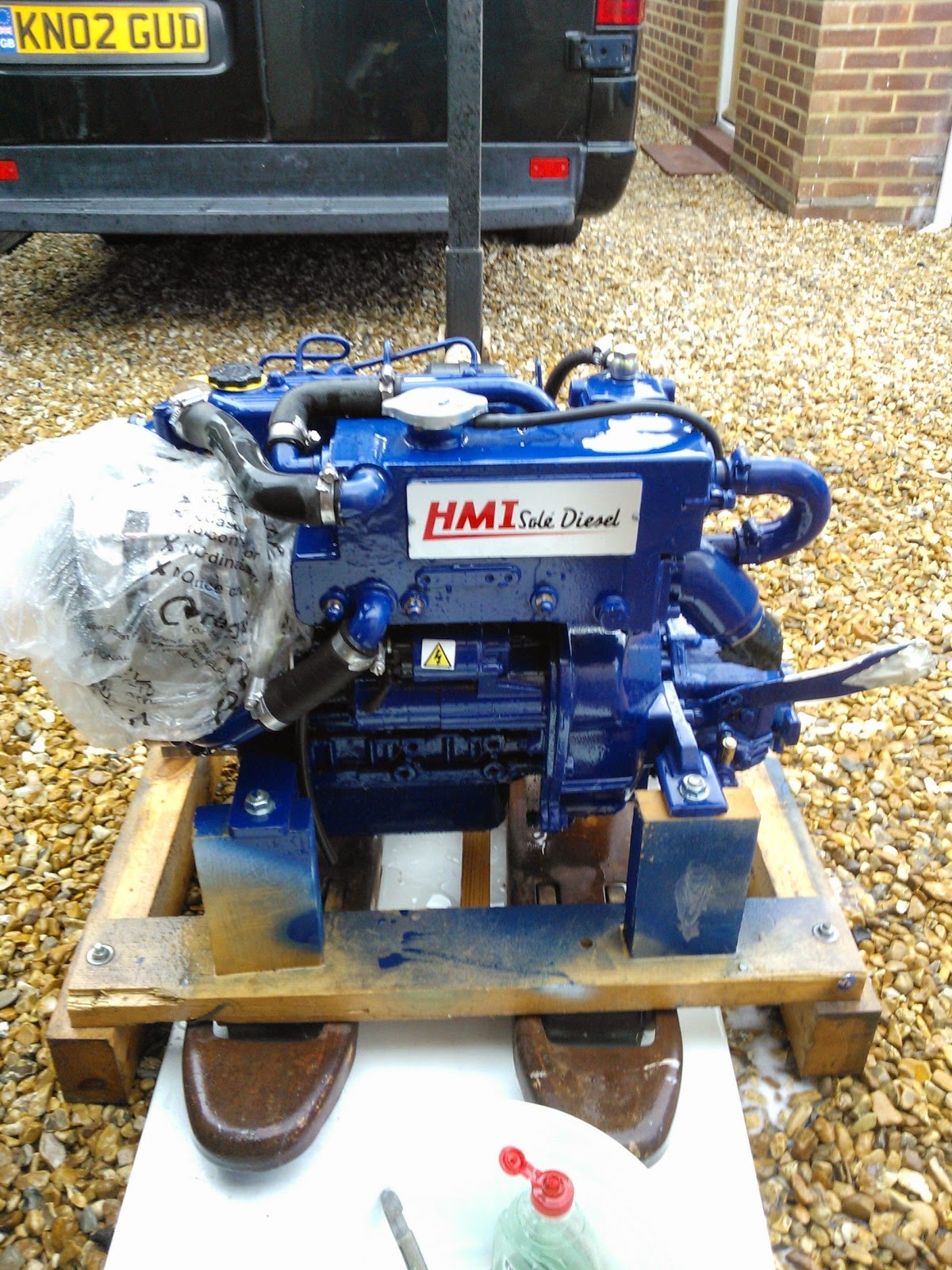 Dragged the engine out of the dark corner in my garage today where its lane for the last six and a half years, out into the light it came covered in a thick layer of dust curiously chipped of a lot of paint and corroding in places and this is in a dry garage christ knows what it will resemble after a season in the boat, probably not alot different to the previous incumbent,

Still got on with bagging and taping up inlets, outlets and everything electrical and spent a couple of hours washing it with some hot water, washing-up liquid and various paint brushes, started to like it as the shine came back and the big v-belt front end i kept staring at made me like it a little more. 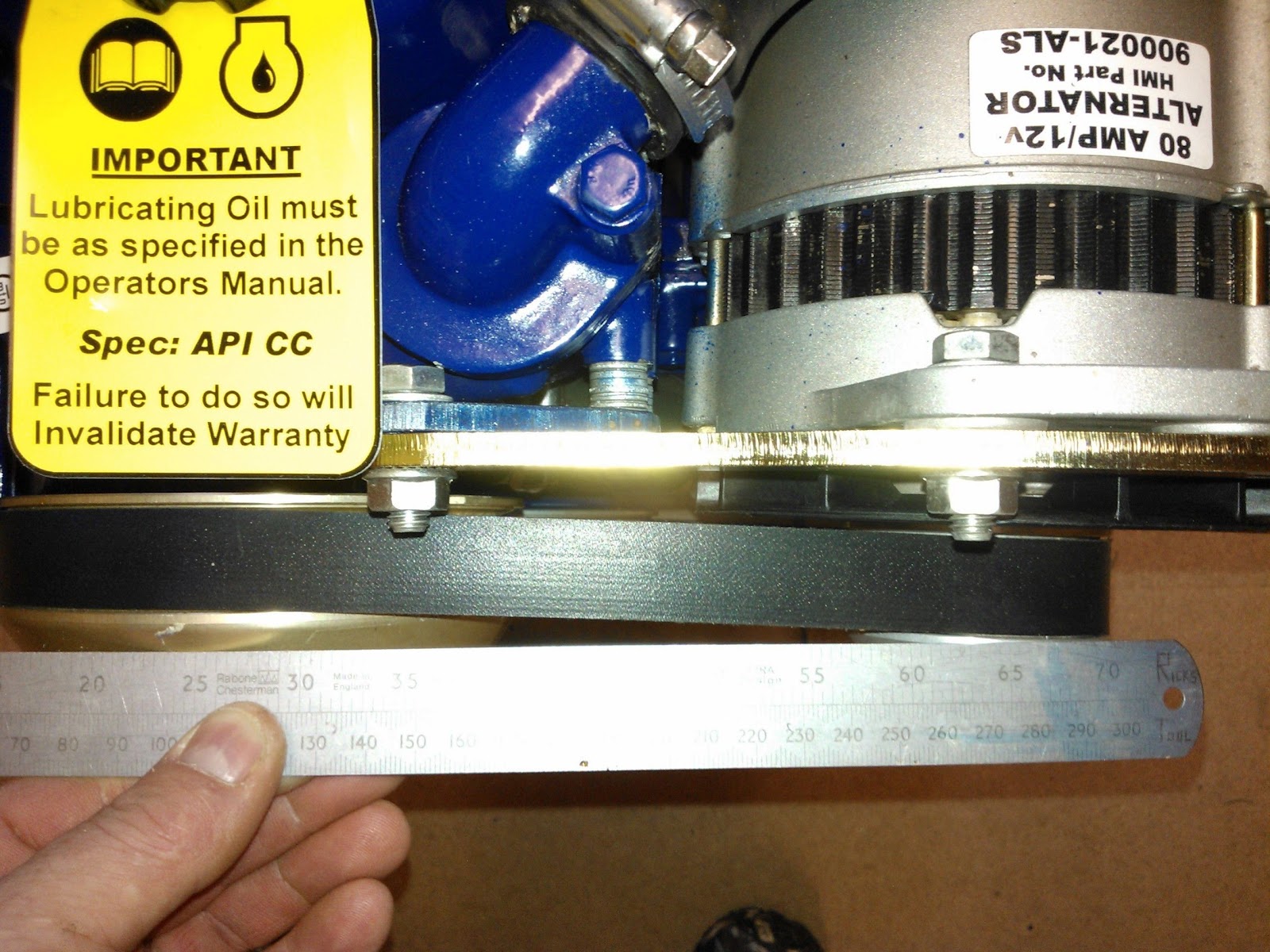 Then mentally got ready for the drag around the garden to the shop although not as bad as a 600kg keel it still made my back scream a little, got there and after some nifty work with timber offcuts and alot of swearing got it into the shed it was only on dragging it through thedoor i noticed how pissed the belt line was on the front of the engine. 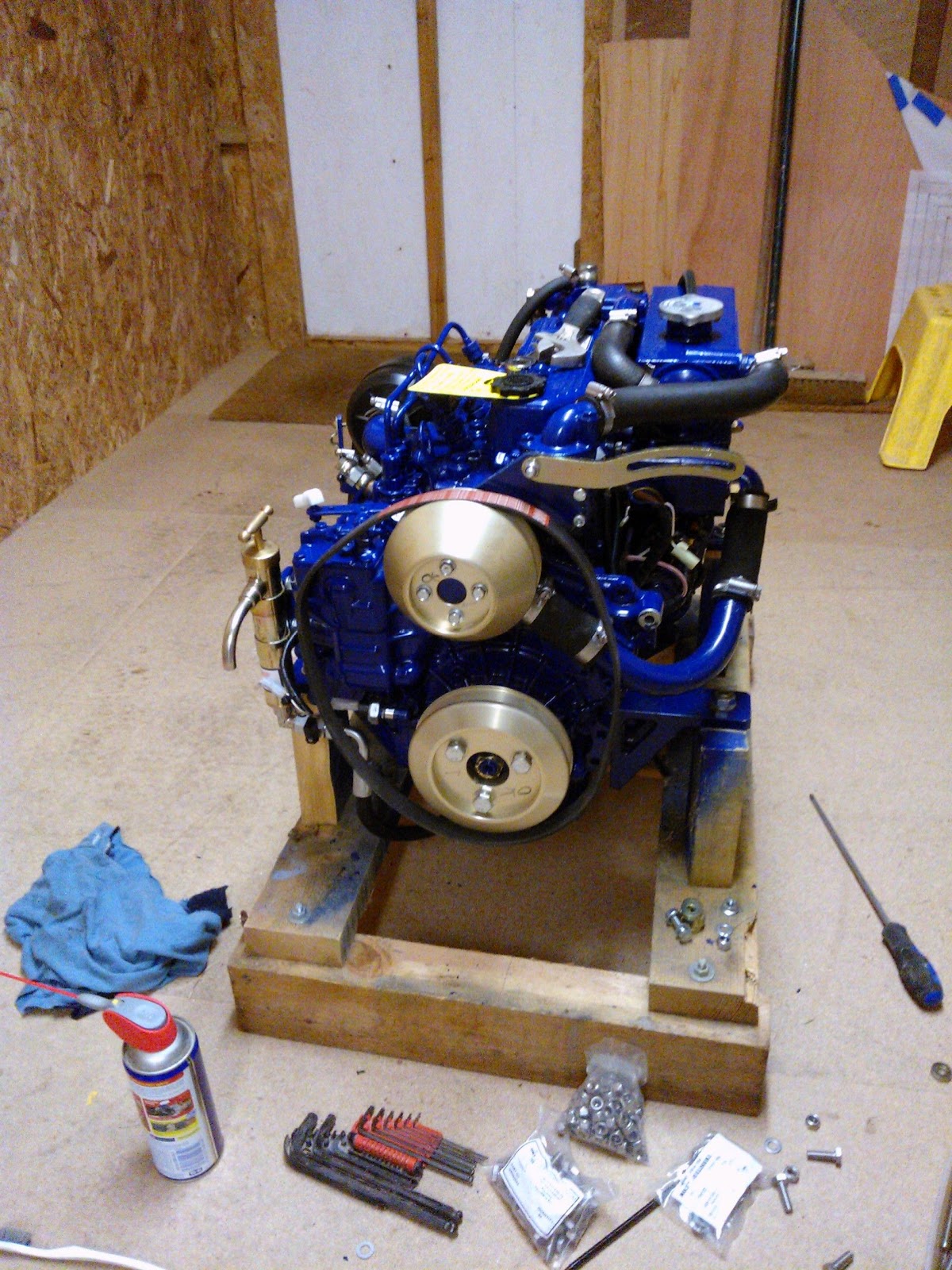 I remember the engineer who came out and had a look tell me it needed doing but paid scant attention to it, on further inspection i realised it was a biggy, so photographed the wiring to the alternator and took pictures of the general arrangement of the front end before breaking it down. Thought i should check the alt. to see if the casting was bent and similarly with the front of the engine block - long shot i know but both were straight as a die, i concluded my engine had been assembled quite poorly, i'd phone Headley at EnginesPlus if i thought he'd pick the phone up, no matter.

After getting momentarily angry at having spent £3350 on an engine that i'm now disassembling i shrugged and realised this is yet another experience i've had over the years with the 'marine' industry where no matter what you spend is any indication of fitness for purpose or indeed the job being done right. 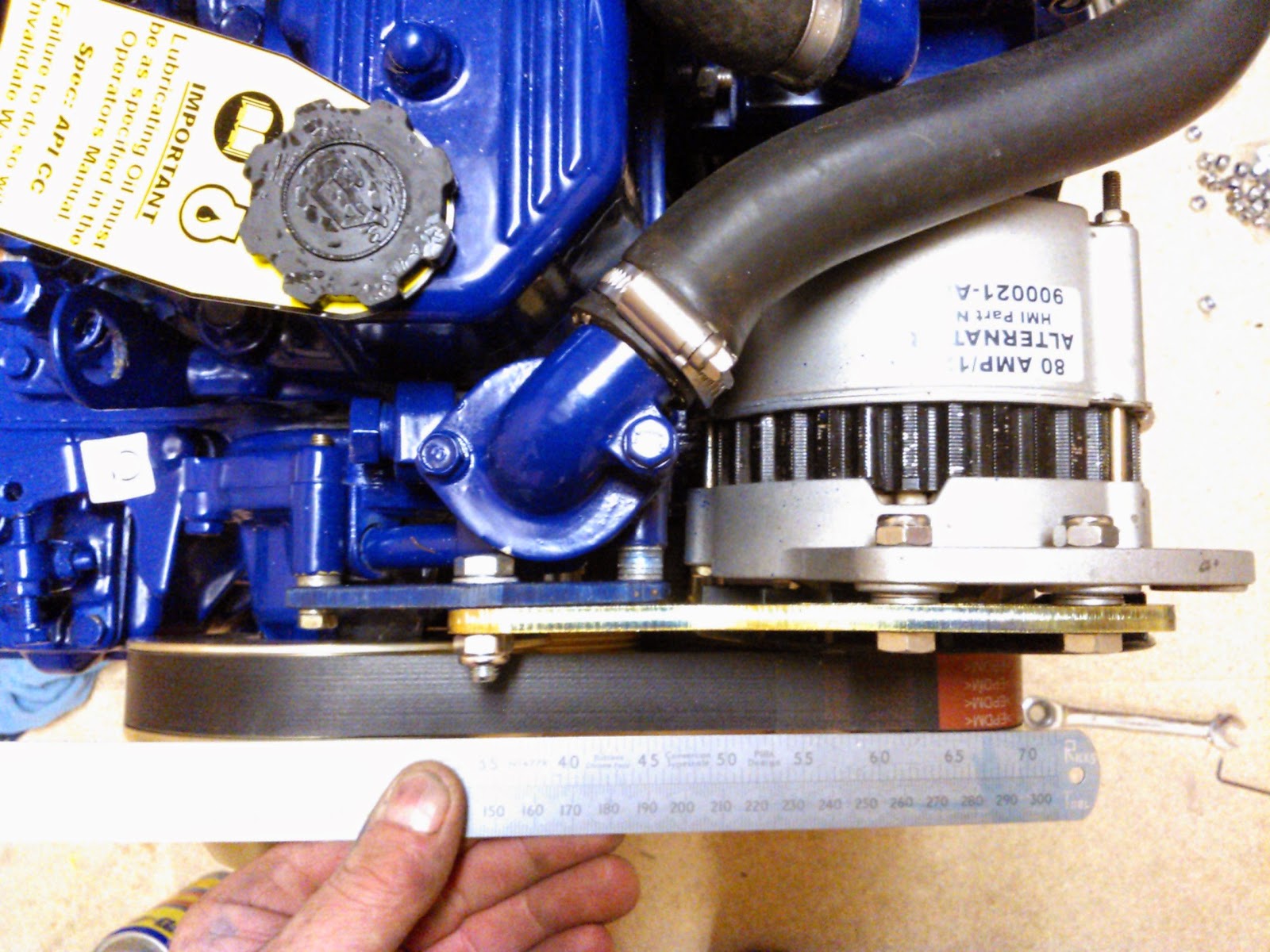 Some three hours of barking knuckles and a bit more salty language i got the belt pulling in the right direction with the alternator this time firmly attached to the front of the engine. Seeing as i found the bottom bolt with the spacers was finger tight with the spacers free to move about on the bolt so doing nothing to keep the alt straight and under tension. 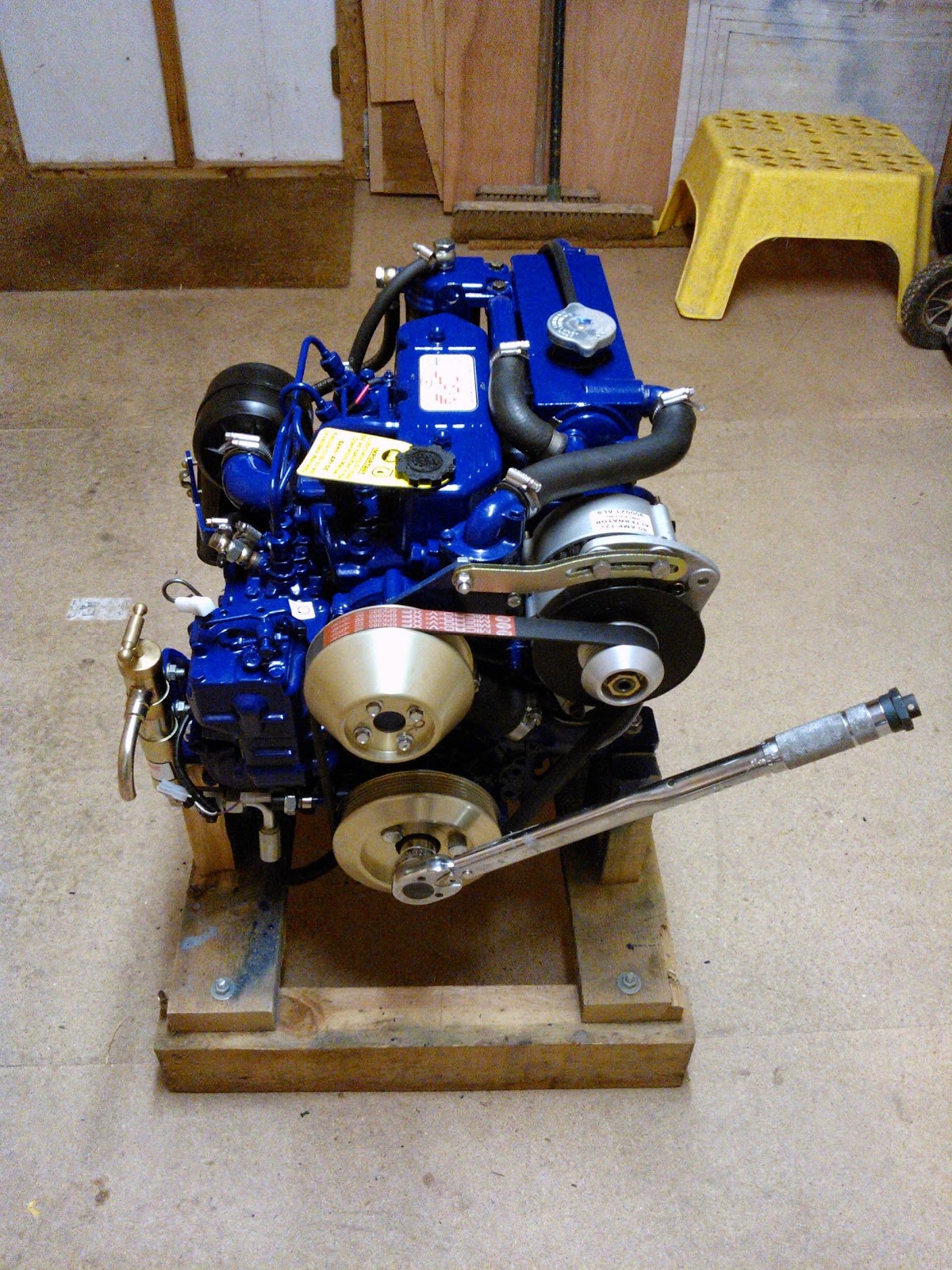 Still on more positive note had a good result after much surfing i found a company called Hyphose who supplied me with all the hoses for the engine compartment at a fraction of the cost of the usual online swindleries to the tune of a 45% saving. Also picked up a flexible coupling and a bilge pump too so as the engines fitted all these parts can go in whilst access is good.
Tomorrow i plan to go to Maplins and buy up a load of heat shrink and insulate every connection on the engine as the myriad spade connectors; kind of reminds me of my first car which was dodgy as hell where lights and power were concerned so want to head that off before i lose access to alot of it when fitted.

Can I ask why you went for a Sole and what HP is that model?

Hi Gary i went for the Mini 29 (think its 27 hp and full continuous revs)as the spec offered for the price was too good to ignore.
I went for the Sole as at the time in 2008 a Beta 20 in basic spec was i think 3650 pounds whilst the sole 29 with uprated alternator and panel, vbelts, calorfier connections was 3350 pounds.
In hindsight i would buy the beta in a heartbeat; having seen one installed on a mates centaur everything has been thought through like it was designed by sailor, filters, wiring, impellers everything is accessible.

Today i've finished sorting the wiring out which looked like it had been done by a chimp with parkinson's. Although to provide balance i should point out the new version of my 29 shows the wiring on the outside and accessible unlike mine buried underneath fuel lines and pipes and obscuring the impeller housing but good to see the impeller is still buried down the bottom facing aft like mine. It was a pain in the arse inspecting that and refitting it with the engine sat on my workhop floor and thats with 6ft around it in all directions.
One final kick in the balls for sole is the fact i've never got a prompt response from the uk agent (enginesplus)the lad who answers the phone is just that; a message taker. recently i was trying to find the availability of a part for my engine, long story short it took nearly three days of leaving messages and after involving another agent did i get a reply.

Paying what i've paid and then essentially finishing off building it and wiring it is an absolute pisstake in my book, take your money elsewhere to Beta or Nanny.