Having changed the blogs title to, "A Gentleman's Folly - A multi-year savings reduction plan." I thought it an accurately witty title of what the projects become, only thing was a few of you (very kindly) emailed me asking if i was okay.

I do apologize as i don't always realise the gravity of my words, especially as i 've been particularly negative, ranting and not altogether cheery in recent times  so have put the original title and description back up.

Things are pretty good at the moment what with working on big classic boats and boats in general, i've given up on the contract work for the time being as its a race to the bottom in terms of earnings - how little are you prepared to work for and how far will you travel for it?

Out of the three companies i priced work for one actually got back to me and  said no thanks, one kept sending me rather cryptic emails with charts and specs with no message or writing in any of them, and the last firm nothing - no reply, so i took it as a bit of sign to leave it all behind.

It was just as i was getting miserable that the call came in to go work on some boats so as the saying goes one door shuts another opens, admittedly the jobs not permanent, but is any job really these days?

What else............I've got an agreement with a family member that if push comes to shove and the boat looks like not being ready before the bungalows sold the money will be loaned to me to get it done to be paid back from the proceeds of the sale so a bit of relief there.

Spent yesterday (Saturday) striking a waterline on the Robert Clark sloop, it proved a little tricky as

a) the boats waterline is a good 7 to 8 ft off the ground,
b) its sat on the trailer over to port which makes getting the line symmetrical problematic &
c) the tripod stand my laser attaches to broke.

Got there in the end after much taping, then walking over to the other side of the shed to see if the line was fair or not, The waterline down the side proved simple enough but trying to bring it around her bustle took several attempts with boss man on tape and me stood down the other end of the shed directing, got it done and a tie coat around the water line so all's good. 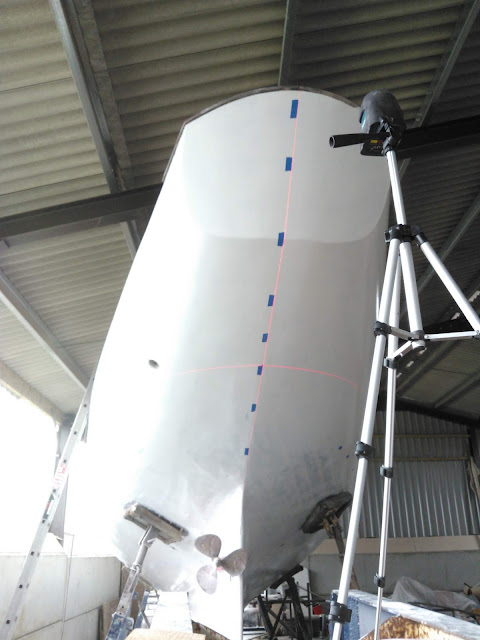