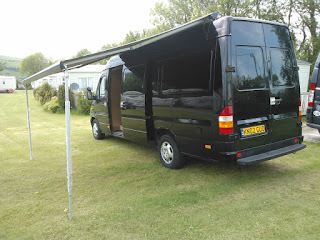 There really only was one thing for it after spending a manic week getting the van finished -  time to tour! With a good friend of mine living in Lynton the ideal opportunity made itself known as the four hour journey would be a good test for the van. 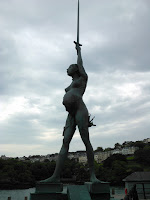 I got there in good time and with only one problem, the inverter didn't work when i hit the button, turns out the positive wire to the power button had snapped from its connector so a soldering iron and some solder later and the problem was solved - stand aside Tesla!

With the van fully loaded it does sit pretty low, no problem other than the fuel economy going out the window, got the awning out for the first time too, pleased to say the composite backing plates in the roof are doing their job as the whole thing can support its own weight although i did put the legs out not wanting to tempt fate. 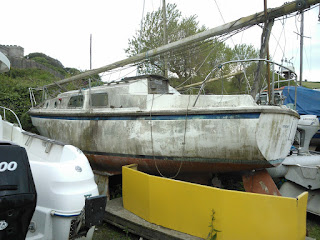 Whilst there i went to one of my old hanuts, Ilfracombe. Very odd scupture on the quay and i don't understand what its about - never mind, the fish and chips are excellent so after sitting on a bench munching away playing spot the Westerly i moved on.
Incidentally theres quite a few Fulmar's in Ilfracombe as well as the older stuff which brings me to a certain sailing club up the road.

Some of you will remember a couple of years back when Dylan was looking for a Centaur that i came across a fairly knackered-looking one called Spindrift, well its still there rotting into the ground as it was two years previously, shame really. Also Centaur number one was there looking in very good fettle considering the boats age, just hope it doesn't stay in the yard too long and end up like the other one. 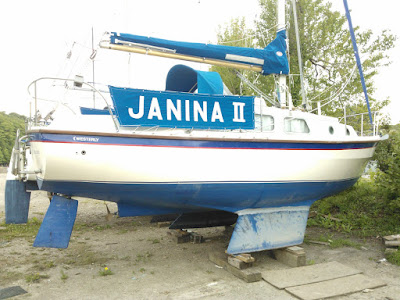