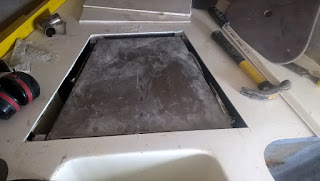 Well i've written and now proof-read my Encylcopedia Centauranica, might get it bound later, still after going through everything, absolutely every last job i realised a glaring omission - the water tank.

I meant to remove it when i was in there years ago re-coring the deck but somehow forgot so without further a do i set about working out where the tank appeared to be from nothing more than the tiny gapin the bulkhead below the berth. From that i could work out where the tank was within an inch or so then drew it out on the berth top and proceeded to cut. 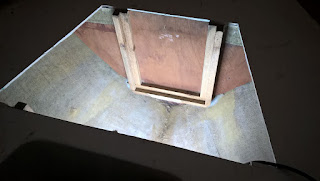 Thing was, and much like the foredeck when i cut that away, after i had joined up all the cuts i presumed it would just come away - wrong! Cue some quite 'salty' language as my fingers kept getting pinched whilst trying to get a chisel into the cut grp, still i persevered and was rewarded eventually.

As it turned out that was the easy bit, as Westerly' way of fixing various items to the boats hull and not being able to figure out how was in evidence here, with all the pipework cut from the tank theoretically it should just pull out but no. 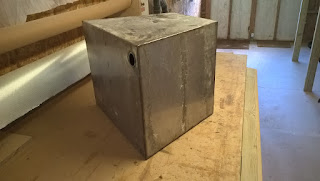 Having made the hole i originally cut wide enough to get my arms down each side of the tank i ripped it from its base, turns out and i haven't figured out how they did it, they tabbed the tank to the underside of the berth base, bizarre.

Have to admit for a tank thats forty plus years old its in great nick but peering in through the old inlet with a maglite proves my decision to replace is the right one, whats on the bottom of the tank can only be described as scaly, brown and it glints too and to think we used to drink from this!

So like the rest of the tanks i will get a smaller polyprope one, i say smaller as the space is a bit awkward but also thought that cycling the water would be better way of keeping the tank clean.

To round off i tabbed and sheathed the bulkheads the tank fits between seeing as it had none due to the internal moulding restricting access, today i'll run some hardwood out for the new tank mounts. 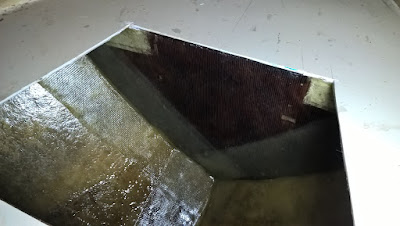 Interesting this been wondering how to do this job in the future. Only a couple of weeks ago I came across a good detailed description on westerly wiki. Had you seen this. Looks a different set up to yours?

Hi Bazzer, yeah i had seen it, it doesn't look too different to mine, mine didn't have the horizontal ply shelf for the tank to sit on or the elaborate glass moulding in the v berth.

That said the Centaurs i have looked over in person are quite different when comparing early to later boats, i guess this the result of problems /improvements being found and corrected.