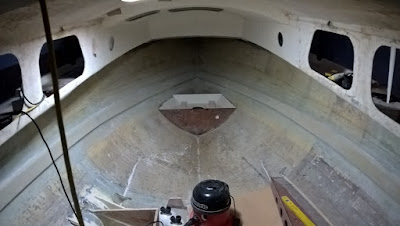 As i'm writing this think i got, for the first time on this project some kind of reaction with the glass dust despite wearing me full face (gimp) mask and crime scene suit - bloody agony at the moment still i,ve got the first couple of bulkheads in the front, no pictures as yet as i rather embarassingly came to a shuddering halt after running out of laminating rollers.

Had a bit of a palava getting the stringers glassed in, starboard side went down all okay, few bubbles in the peel ply but no real problems but the port side just made my arse drag the next day as the peel ply had pretty much detached itself completely so spent what would've been the day templating and making the bulkheads washing and sanding instead, still all done and looking mighty like a purlin in a roof she now has a ring beam of sorts.

As i'm still waiting for the rollers i'd ordered days ago my attentions have centred on the rudder blade, i think because it keeps staring at me from the corner of the boat shed. Again like so much of this folly it looks kinda well............ meh, you know, not offensive nor particularly pleasing on the eye which as someone like me who permanantly fidgets and is prone to rather impulsive moves started doodling and reading some old text books from my days studying  the subject. 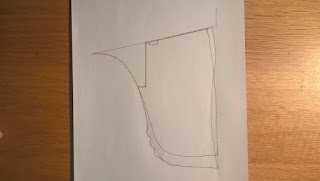 Plus a bit of banter over on the Westerly Anarchy thread at SA got the ideas flowing after a Greek lad got in touch as he wants to change the boats rudder shape - i should point out he has the fin keel Centaur, a Pembroke, and quite rare they are too by all accounts, less than a hundred made, his boat looks in good nick but the rudders profile as it is an absolute howler, its almost eye-bleach terrority to be honest, NACA 0050  anyone?  - Its that bad.

After posting pics of mine and how i went about it plus some good points courtesy of Bob (Perry) and a handful of others got me thinking about mine - i should say i will launch this boat at some point i just dont know when, bear with me it'll be worth it - honest.

After googling and finding a couple of papers on the subject of tubercles and rudder design in general i got to draw some shapes, plus i'm wondering whether to keep the skeg although i guess it offers protection to a degree. 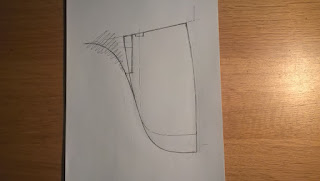 Now i'm the first to admit she's only a boxy 60's caravan of a 4KSB but thats no excuse for not getting her whizzing along (stop laughing) at a half decent pace and seeing as my original rudder looked like a futuristic cricket bat and the last Centaurs ever built had a rudder resembling a childs drawing of an aircraft wing thought it deserved a bit more .........well................ thought.

The only problem on mine is the shaft is worn to the point where in certain sea conditions i can see it jamming against the skeg but will follow this up with re-assembling it on the boat in the next couple of weeks and seeing if its as bad as i remember................................

Ah Roger great to see you back, its been a while since I looked in lovely to see some progress.
Enjoyed the new updates.Looking forward to many more.
Ade

My pleasure Ade, have got the third bulkhead in and its going very well, just waiting on my new non-blushing epoxy to arrive tomorrow (26th) and then i can tab it in, cheers for looking in mate.