I too have suddenly become "un-busy". 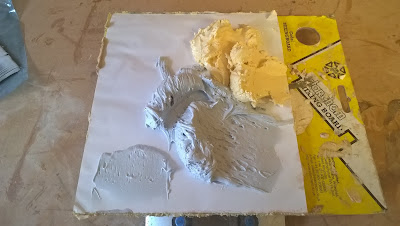 Got sacked last Monday - in my case it wasn't a producer rather an over officious member of site staff. At least i'm not freezing my arse off in the van although I could've done with the money but still I wont take that shit from anyone least of all some kid barely out of short trousers.

Anyway this has freed up some time in which to get on clearing the garage to make the paintshop plus i wanted to start tidying up the newly appointed bilges before i get the frame down permenantly. I'm not too fussed about them being perfect but want them smoother, to do this i'm using another product from my new best friends at Reactive Resins. 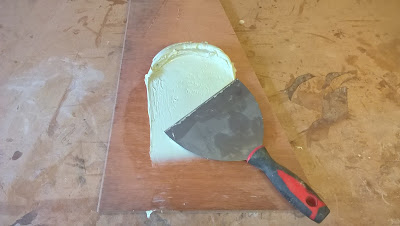 This stuffs called Easifair S, its a spreadable 2 part filler supplied ready made in two separate tins and again like their excellent resin system ratios 2:1 by weight so not hard to measure and use. Also because of this you get a characteristic sorely lacking with additive based products such as Wests and thats consistency everytime you use it.

The filler itself is lightweight and wet in appearance, the hardener quite the opposite, almost like dry sponge cake, initally i thought it may have gone off but continued anyway as it all became apparent when mixing the two. You get the perfect fairing filler that doesn't slump but has enough 'give' in it as to be easily spread using a plastic card . 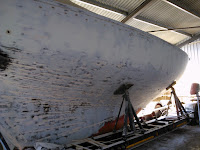 I used this filler as well as the trowelable version last year when fairing a 43 foot Robert Clark sloop and initially dreaded the washing and wiping down given the magnitude of the task until i learnt much like the rest of reactive resins products they're non-blushing. 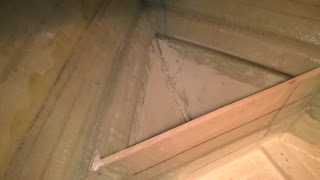 So unlike Wests its as simple as; apply, let it cure then sand, theres no dicking about with scotchpads and patting down with paper towels. So far i've got the furthest forward compartment done and can report it sands a treat and like their resin is better value than West systems.

Just to reiterate, i'm not getting paid for any of this - i'm just a happy customer of reactive resins, as i've discovered, using their products is a no-brainer so get them & leave the washing and wiping up for when you next do the dishes. 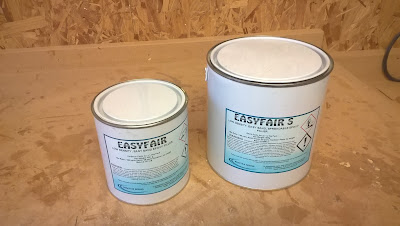 Sorry to hear that your income stream has been temporarily interrupted. Any mileage in lodging an unfair dismissal claim?

Na not really, i'm glad to be out of that situation to be honest - the money is an inconvenience and one i shall no doubt overcome with a little time and tenacity as before.

No its more the fact I'm more pissed off with the main contractor (Willmott Dixon) employing these psychologically deformed graduates who dont have the first clue about anything let alone construction but this country' weakness has always been management so not entirely surprised seeing the 'future' last week.

Meant to ask earlier but can you give details of Water Tank please.

What d'you wanna know? Its a polyethelene osculati tank, from memory its 43 litres capacity, you can buy them off ebay or like i did from tektanks.co.uk, they're around £100 give or take.