Finally got round to fitting the forepeak frame over the last few evenings, i must say its bloody baking in the shed at the moment: 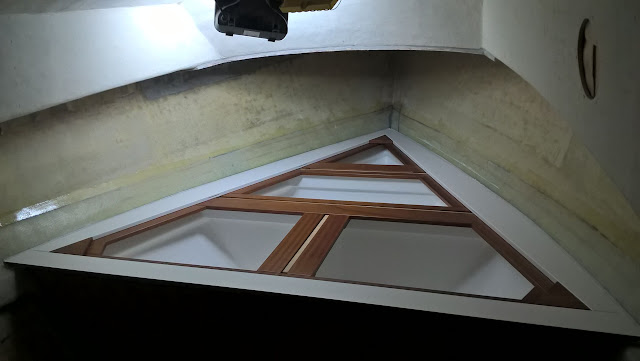 Got a few days off last week so seeing as i was unhappy with the volume of over-spray on the floor I decided a re-think was in order, the plan - be it roughly - was to add more air pressure going in and to make sure it was greater than that of the exhaust fan. 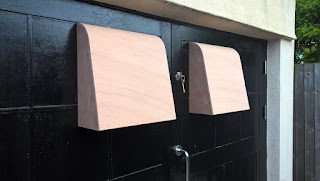 I understand from brother Rik this is called 'positive pressure' in spraying circles so i moved the fan originally in the back of the room to the front, beside the original one in the door so there's now two fans up front and added what can only be described as a miniature jet engine to the back. 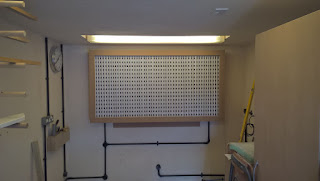 Preliminary tests indicate i now need a tether to clip myself to whilst spraying, its pretty fierce in there, no but seriously its way better than before a fact borne out by a relatively clean floor after a good few hours of spraying.

Also after much soul searching (and bank balance checking) I bit the bullet and bought the Devilbiss GPi gun along with a smaller gun for detail work, an ANI 150 on the recommendation of 'The Gunman'. This guys the tits where spraying concerned, his stock in trade is automotive  and has the most comprehensive youtube channel with tutorials, reviews even sprays cars and talks you through what hes doing simultaneously, learnt loads from watching him - great bloke in my opinion. 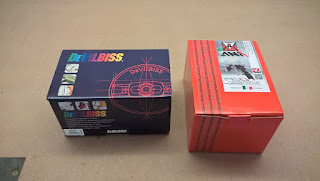 What else, got my first paid job for the spraying booth, a couple of internal doors for a customer to match their existing ones which needed to be half the height of a conventional internal door, turned out great, did them using my sealey gun. That brings me to why i bought the devilbiss - the sealey sprang a leak behind the nozzle where the air needle passes through the gun and no amount of tightening would stop it and so as it was dripping paint on the substrate i was spraying thought it might be the time to make the change. 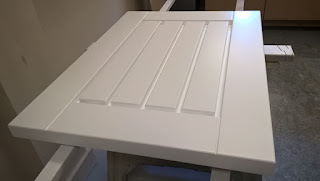 I still use it for priming but for top-coating i now have an 'industrial' grade gun, the sealey' great but i guess using it daily as i have done has shown its limitations, still on the plus side i have three of the fuckers so can cannibalise them if it comes to it.

Got another delivery from Morrells for the paint to do the bilges in the forepeak with, my thinking being i can get the paint on and come back 40 minutes later and go again and guess what? Thats exactly what i did although i got as high as kite in the process. Even with the static gimp mask on, the air fed one will be the way to go in future, i told myself it'll be fine just rollering it on but after every session found myself panting like a dog. 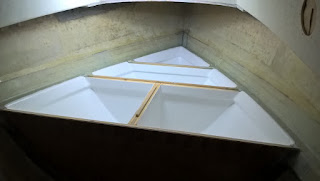 Still the results look great, just need to spray the final topcoat on the forepeak frame as i spent a long time yesterday filling and fairing every dimple and shake in the timber. Still pleased with it though and so once that's done the reassembling can begin.
Posted by roger ball at 21:44 2 comments: