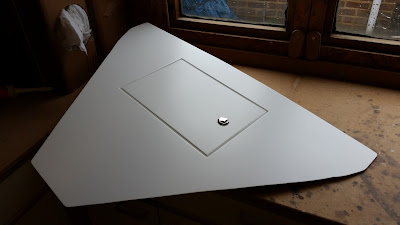 It appears my memory muscle does still work, broke these two off the former last night and cleaned them up ready for processing into the storage pods for the forecabin: 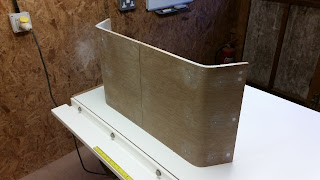 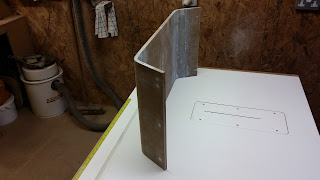 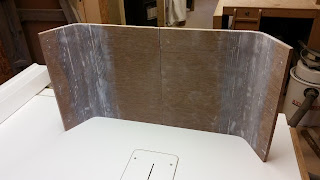 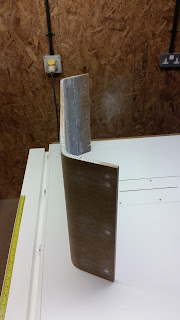 Memory is a strange thing especially with the passage of time this project has taken. I guess some of it is too hard to bear so i must have blotted alot out, its only when i've returned to a part of the project and as is now the case, i've forgotten to take any note of the measurements or the methodology that i have had to sit down and figure it out.

Not a problem as thats essentially what've been doing for the last 9..................(memory block...............err i mean) last couple of years. Now that i have settled on a design for a couple of storage pods to be fitted up under the foredeck on either side of the forecabin - one end going to the anchor locker but the other finishing two-thirds along the length of the v-berth i wanted a resolved-looking design which naturally included a curved end seeing as it wouldn't meet the new bulkhead the other end. 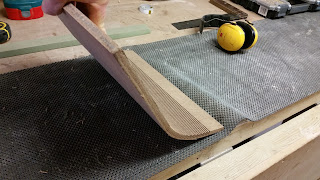 Problem was i couldn't remember how the hell i got 12mm ply to behave like spaghetti, so i took to my own blog using the search widget to find pics of the curved galley modules i made over two ye........... a little while back.

Turns out if anyones interested  (i doubt it) in 12mm  you need to cut a kerf 10mm deep at 5mm intervals, so with my table saws 2mm blade you get a 3mm gap between each kerf, fascinating isn't it ....not.

I still have a heap of joinery i've made that needs to go back in which is nice as i don't have the ballache of making many more bits to get the insides upto muster. Another bit i had made a while ago then this weekend started playing with was the ornamental bulkhead that sits over the structural one to finish the anchor locker. 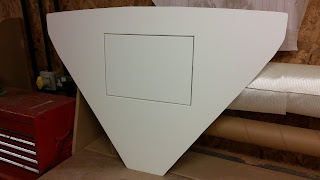 This - in the interests of weight is made up of 6mm ply and framed up with 18mm to take a hinged door so access is available, this will be either screwed in from behind or the front seeing as the insulation and subsequent liner will hide the attachment. 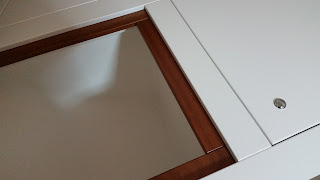 Still spent the weekend bolting in the first of many pieces now made forthe inside, namely the locker doors and ironmongery. Didn't go quite as planned even with each screw hole properly piloted and even some copper slip on the screws, i still managed to grind the heads off  of a few of them.

What else? The keels. The keels - what can i say i'm still crazy after all these years to get them right, took the advice earlier given about 'crisping up' the trailing edge and did the same to the leading edge and the top of the trailing edge too.
To finish i gave the keels a quick coat of epoxy and pigmented it black to see the full horror of my fairing attempts from a few years ago and it is terrible but now know where to make the corrections, needless to say never get your boat gel-peeled! 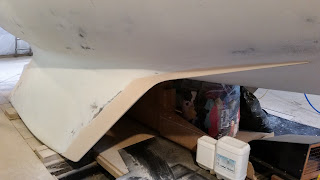 I have a few days off as works slack (surprise surprise) so gonna push on insulating the forecabin and start fitting out the space.

Also nearly forgot, i have the anchor locker all done complete with foredeck reinforcing, a sub-assembly to take the forestay loads a bit better than the original that showed to be pulling slowly up through the foredeck, no really.

It looks quite '50's sci-fi but will spread the load better than the six 20mm penny washers that was the previous method. I found a bew way too of pulling glass round corners and that is to mount the piece you're glassing up on vertical plates inside the bag and then apply pressure, works a treat. 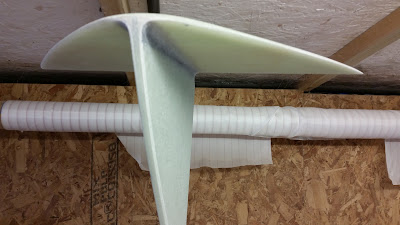