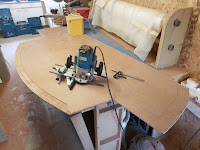 Originally the plan up front was to make two compartments utilising some curved plywood - one for the heads and the other a hanging locker but after looking at my drawings and realising the intersection of heads bulkhead meeting the main bulkhead was miles away from the compression post decided to effectively reinstate what was there before. 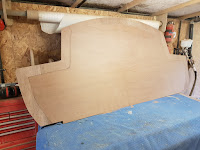 It not as much of a waste of time as you'd think as the old structure was rotten and secondly i get a nice big cubby hole into the fore cabin, sorta makes it a snug / den in my eyes. Plus by having a full width front bulkhead now, i can tie everything together giving the boat a lot more rigidity plus i need to find someway of anchoring the babystay fitting makes this revised arrangement a problem solver all round. 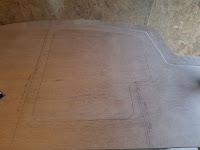 The pace of work is a little slower than i'd of liked but still finding my feet abit but my plan since lockdown was always to get the internal structure back in the boat spray-finished and fitted. I'm hoping by then (a months time) lock down should be over and then i can earn a bit more money to finance a few more bits and pieces to move the project along.

By the end of the week i'd like to have the fore cabin bulkhead glassed in and the right hand side main saloon bulkhead in too then its down to fitting the intermediate bulkheads to make the heads and hanging space then onto the main saloon area. 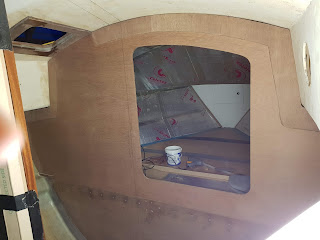 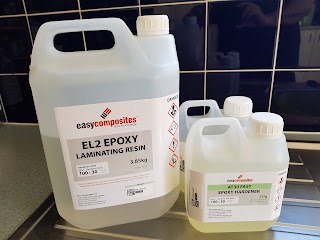 So now i'm half way through the final gallon of the good stuff (RIP Reactive Resins) its time to look for its replacement. Thought i was gonna go the MAS route but at £160 delivered for 6kg thought better of it, i reluctantly looked at West Systems and that's £140 delivered for a 'B' pack so over to google to find my new epoxy.

I found a company called Polyfibre but couldn't find any tech sheets of mechanical properties or specs so ruled that out which left me with Easy Composites & their EL2 epoxy system. The main objective was to compare mechanical properties with both West's and Reactive's products I've been using over the years. 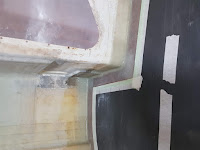 Interestingly EL2/AT30 is superior to Wests 105/205 combo in terms of mechanical properties and a quick chat with their tech guy confirms it's good with all filler additives including longtime friend of the show Cabosil and doesn't blush to any great extent so put an order in. 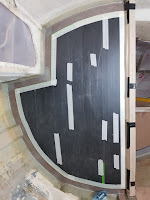 Cost-wise it's pretty much the same as Reactive's epoxy, works out at around £15 per kg delivered which is better than West Systems at nearly £24 a kg delivered and Mas at £27 a kg. So from here on in (or until they go broke too) i shall now use EL2 epoxy & AT30 Fast Hardener for the project.

Knowing what i know now, when i took a call from Reactive Resins as to whether i wanted anymore resin, me saying no then them going belly up a couple of months later i may stockpile enough EL2/AT30 to get me through to the end as companies of all shapes and sizes are going pop daily. Initial impressions of the resin are good, low viscosity which i like and pretty clear too, i shall report back after I've knocked it up in different additives. I have enough reactive epoxy to get the heads and R/H main bulkhead in then will switch to the new kid.

At the moment work's progressing although talk about the wrong time to run out of nitrile gloves and a few other bits of PPE, what i pay £6 for 50 pairs of gloves now costs around £25!  Still I have enough to get the bulkheads up front in, the left hand side is done, i now need to build up the curved bulkhead, sheath, paint then fit and same with the R/H main bulkhead. 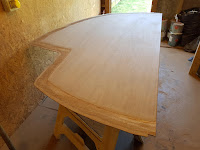 So there's that and what with my new measured approach of starting one job finishing one job its slowly bearing fruit. I got the compression post assembled and fitted, this is a key component as everything stems from it: the main bulkhead which locate either side of the compression post via a 12mm deep groove help transmit the rig loads through the hull. 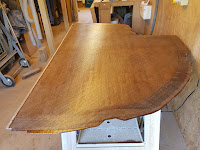 The only slight concern is the post is bowing outwards to towards the stern by about 1.5mm in the middle so think i'll brace it horizontally when it comes time to attach the heads bulkhead to the back of the post like i did the cockpit lockers when the whole lot popped by an inch. 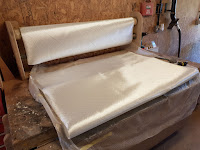 I mean lets be honest the Centaur's rig in standard form is held up by a bewilderingly small amount of hardware, the main shrouds are fastened with 2 x 50mm penny washers either side bolted through a balsa cored deck. The inners make the windows leak such is the tension created by that arrangement and the compression post on my  'A' layout was a piece of 35mm diameter stainless tube bolted (offset by some 50mm) to the coachroof. 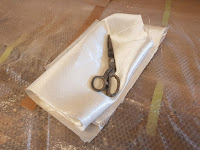 I've taken the shrouds to the outside of the hull on mine which will land on 10mm solid stainless steel chainplates through-bolted to a 20mm thick glass plate that measures 300mm x 300mm so i'm on the right track although as a mate pointed out at the time, "everything has a failure mode so could end up with half the side of the boat missing if that lot lets go!" 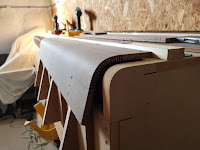 I try not to think about these things, that and whether i put enough back into the keel stubs but once you go down that road - I've done a couple of times - you become mentally paralysed and experience great difficulty moving forward or at least i do.

So today got the post in, the left hand bulkhead paint-protected and dry-fitted. The original plan today was to get that glassed in but then thought it'd be easier to glass the heads side of the main bulkhead out the boat than in. 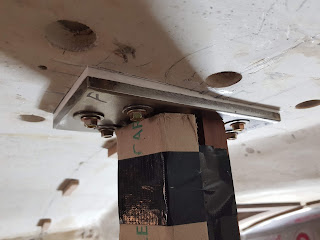 From memory it quickly becomes a sauna doing glass work in confined spaces so got some cloth off the big roll and set about sheathing, seemed a lot easier than i remember so stuck it out in the middle of the lawn to 'kick' seeing as the weathers so good at the moment. Tomorrow will see me sand that back and set the bulkhead in its groove on the post after a light bead of thickened epoxy in said groove and then off to races tabbing in both sides.
I was going to fit the floor (anti slip vinyl the same as the van) but thought with the epoxy flying about tabbing the bulkhead i'd get that done then lay the floor. 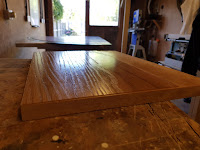 For a lacquer sold as 'Matt' it has a lot of shine to it hence the need to match pieces i sprayed three years previously. So after much dicking about with matting agent, mixing cups and many syringes i got it there or thereabouts at around 10-12% matting agent in a pot of Matt lacquer to match Morrells formulation. 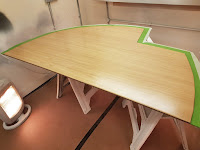 So now that's figured out, and quite a bit cheaper than Morrells i'm waiting on a delivery of PU adhesive, structural adhesive (Plexus) & some consumables from China so i can build up the compression post and fit that into the boat, from there everything else follows.

In the meantime I've elected to make a series of rounded corner posts required throughout the boats insides until the deliveries turn up.
Posted by roger ball at 10:05 No comments:

Given the lock down and the country' impending bankruptcy i somehow feel a lot more relaxed about getting back to work on the boat.

The old days (highlighted many times here) would have me working on the boat whilst stressing about the next paycheck and where it would be coming from. Imagine my surprise from the fallout of C19 that the entire Western world is in the same boat as myself and many other self employed. And having got a break from the mortgage for a few months (have yet to apply for Universal Credit) kinda thought its now or never. So what to do? 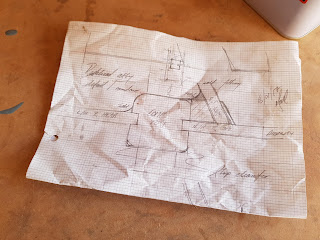 First it was a gathering of information, digging out old sketchbooks and notebooks from the backs of drawers around the shop and looking up where i got to some three odd years ago. I remember where i was when i did the last bit of work as i was fitting foam insulation to the forecabin when the Grenfell tragedy happened, that was - i think June 2017 so almost three years.

One thing, and it'll only get worse with the ensuing economic fallout from the lockdown is the number of suppliers going under or closing depots so either way having to find alternative arrangements seems to be a thing now. At present when the current stock of the late great Reactive Resins epoxy runs down we'll be onto epoxy number three and resin number five for the project having used Polyester, Vinylester, Wests, Reactive epoxies and now probably Mas when i reorder. 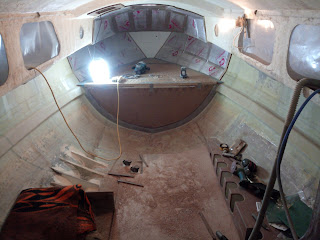 So yesterday was a day of scraping back and making a few changes to the saloon. This involved making more access to the keel bolts to starboard and cutting the rest of the remains of the original sofa berth i built back in 2014.


The reason being it seemed something of an extravagance to give over an entire side of the saloon to a galley in a 26 foot boat. So after much thought and with measuring tape in hand the cooker will go back where it was; to starboard of the main bulkhead door and the sink/icebox combo will go opposite to port against the bulkhead. 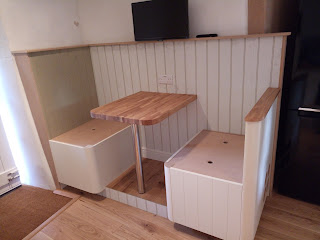 This then keeps the saloon free for a dinette arrangement but spun round 90 degrees running length-wise in the boat a la Griffon style. Got the idea after making this for a customer a couple of years back.

I have just under 6 foot beam-wise to the inside of the coach roof in the saloon so this will just work and make for a more sociable space. The benefits are you can sleep two people in the saloon on either berths with separation especially if they're not that well acquainted and the other via an infill over the floor area; you can sleep beam wise across the the boat in what would be a 6 foot wide by nearly 8 foot deep berth. 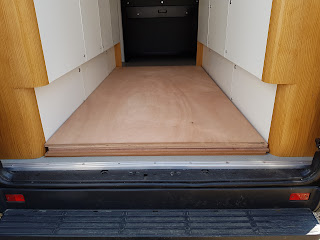 Also found out after all these years i had a marine ply supplier literally on my doorstep, well Verwood but i used to travel to Southampton & Poole to buy BS1088 ply only to find Bradfords builders merchants have it on the shelf so promptly borrowed a mates account and got a couple of sheets of 12 & 18mm last week, that should be enough to get the saloon done.

Paintwise i've ended up ordering 2k car paint to the spec of the Morrells stuff i normally use for furniture so should be more durable given the fact its for cars, like a lot of things at the moment time will tell...........
Posted by roger ball at 08:52 6 comments: